It’s summer in Canada, and that means we will soon be enjoying nature’s bounty at our local farmer’s markets, grocery stores, or if we’re lucky enough, straight out of our own gardens.  While peaches remain my favourite local produce, I hold a soft spot in my heart for beets (or, more accurately, beetroot – the bulbous part of the plant that comes out of the ground).  I love beets not only for their vibrant colours (candycane beets are a favourite in our household) and Earthy taste, but I also get a real kick out of the health and performance benefits they have to offer.  Put simply:  beets are fascinating little guys!

Surprisingly (to me, anyway), beets are actually pretty modest in their vitamin and mineral makeup (when I see their rich colour, I expect to see huge numbers, but as you can see below, that’s actually not the case).  What makes beets standout, nutritionally-speaking, is their nitrate content.  Yes, nitrates:  the oft-demonized additive found in cured meats, like bacon and bologna.  While nitrates added to smoked and cured red meats are associated with an increased risk of certain cancers (it seems the combination of the nitrates, along with the heme iron and other compounds in red meats, are the issue), it turns out that nitrates that naturally occur in vegetables (which include not only beets, but also spinach, celery, and rhubarb) seem to be health promoting:  for example, numerous studies have demonstrated that dietary nitrate consumption can be associated with lower blood pressure and improved cardiovascular function. 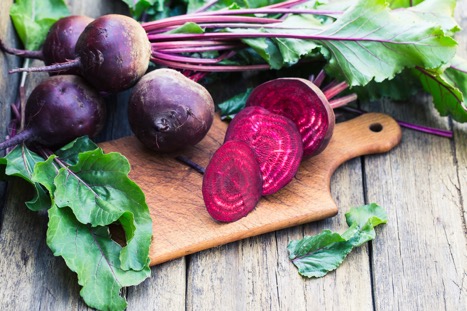 How do nitrates work?

Whether for blood pressure or sport performance, nitrates exert their beneficial effect when they are converted to nitric oxide (NO).  When we eat nitrate-rich foods, the nitrates are liberated in our intestine, and then transported through something known as our enterosalivary system back to our mouth (weird, I know – they just left there!), where bacteria converts them into nitrites (note the small difference in spelling).  The nitrates are then swallowed, and then transported to tissues in need, like hard-working muscles, where they are converted to NO.  Nitric oxide is a small, short-lived molecule that relaxes the walls of our arteries through a process known as vasodilation, helping to increase blood flow to the local tissue.  Relaxed blood vessels and more efficient blood flow not only translates to better blood pressure control, but it also allows for more oxygen to get to our hard-working muscles during exercise.

A number of studies have examined the effects of taking dietary nitrate supplements on sport performance, and many have had promising results.  But what about the effects of real food?  (We are, after all, talking about beets here).  This question was addressed by researchers who gave a small group of recreationally fit runners 200 grams (a little over a cup) of cooked beetroot about an hour before a 5 km time trial run (meaning, the participants were asked to run 5 km as fast as they could). The participants who ate beets not only had a higher average running speed than the participants who didn’t, but they also reported a lower perceived exertion during the run (meaning they found the run easier after eating beets).

Great.  So now you’re saying I have to eat beets every time I want to have a good workout?

While the results of this study are intriguing, there is one obvious limitation: you would actually have to down a half-pound of beets an hour or so before you run.  And while I like a good beet as much as the next guy, let’s get real:  that’s a lot of freaky-red beet pee.

So, if you’re not into chowing down on beets every time you hit the road, don’t sweat it: a more recent study examined the effect of eating an overall diet high in nitrates on exercise performance, and the results were promising. In this study, participants were assigned to either a diet high in nitrate-rich vegetables (including arugula, collard greens, red beetroot, spinach, and celery), or one that contained an equal amount of lower-nitrate veggies. After a week, the participants completed a moderate-intensity steady cycling effort and 5 consecutive all-out sprints.

The result?  The subjects that ate the high nitrate diet had a lower level of oxygen consumption during exercise (an indication of being more efficient while cycling), and were able to sustain a higher peak power during the last 3 of 5 sprint efforts.  Translation:  They were able to work harder while using less oxygen versus those who ate a lower nitrate diet.

Can beets – or nitrates – help every athlete?

That’s less clear.  While studies on moderately-trained and recreational athletes have generally been favourable (yay for me!), research on elite, or very well trained athletes has been less convincing (boo for them!).  It’s possible that high level athletes have already maximized their ability to use oxygen, rendering the added nitrates less useful than for weekend warriors, though it’s possible that some elites do respond to nitrates better than others.

What if I still don’t want to eat beets (or veggies, for that matter)?

If you’d rather get your beets from a supplement, there are several products on the market. Beet It, a drinkable beetroot shot, contains the amount of nitrates available in 2.5 cups of cooked beetroot, while Beet Elite contains the equivalent of 6 whole beets.  Just be sure not to use mouthwash or chew gum after drinking beet juice: as mentioned, part of the conversion of nitrates to NO occurs via bacteria in your mouth, and mouthwash abolishes them.

Alternatively, if you want to enjoy the nutrition of beets without having to eat them as part of a meal, try adding a peeled, uncooked beet to your favourite red smoothie for an even more vibrant colour. Raspberries work well to complement the beets’ earthy flavour.

How do you prepare beets?

Cut off the greens and boil with the skin on until soft. Once cool enough to handle, peel skin off with a knife or your fingers. For a simple side dish, cut into medallions and serve drizzled with olive oil, balsamic vinegar, and a sprinkle of salt and pepper.  You can also roast beets in the oven (or on the BBQ) with olive oil, a bit of salt and pepper, as you would any root veggie (I like them with sweet potatoes and rutabaga).