Last week, I presented at the PANEX Conference in Toronto.  I sat on a panel with Dr. Stuart Phillips of McMaster University, along with Dr. Trent Stellingwerff of the Canadian Sport Institute Pacific.  I’ve know both for a long time:  Dr. Phillips was my first-ever nutrition professor at McMaster (I was studying biochemistry, but was interested in making the switch to nutrition, and he taught one of two courses in the area), and he even wrote me one of my reference letters to get into grad school.  Trent and I shared lab space in graduate school together at the University of Guelph, and to this day work closely in a number of areas, including athletics, where he heads up our national Integrated Support Team, and triathlon, where he works in physiology, and I work in nutrition.

Yet despite having regular interactions, and having seen both present a number of times over the years, I still manage to take something new away every time I see them talk.  In this case, I was particularly struck by a slide Trent posted that was derived from his work with the world-famous distance-runner, Haile Gebrselaisse.  If you’re not a track or marathon enthusiast, no problem:  Gebreselaisse’s records speak for himself.  He is a two-time Olympic gold medallist, a four-time world champion (in both cases, in the 10,000 m run), and set the world record in the marathon twice, most recently in 2008 at the relatively senior age of 35.  His latter record stood for three years.  To this day, Gebreselassie is regarded as one of the greatest-ever long distance runners.

Trent is not only a world-class talent in exercise physiology, he also knows a thing or two about nutrition.  And in 2008, he was fortunate enough to be part of the team that helped Gebrselaisse set the world record at the Berlin Marathon.  Trent was kind enough to share the details of Gebrselaisse’s sports nutrition plan for the race as part of his presentation at PANEX, and the results might surprise you (they surprised me).  There was no witch-craft, no trade secrets, no sneaky new technology to help the Ethiopian run faster than any human before.  To win Berlin and set the world record, Gebrselaisse drank about a cup (250 ml) of sports drink every 5 km.  From the 20 km mark and onward, he added a sports gel every 5 km (apparently, he likes black currant).  And that was that.  All told, he took in 8o to 100 g of carbs, and 900 ml of water per hour.

So, what can we learn from Mr. Gebrselaisse?  For me, it was a big reminder that carbohydrates fuel fast performance.  In a world where carbs are seen as the enemy, and sports drinks are seen as poison, Gebrselaisse’s sports nutrition plan speaks for itself.  To run at the unfathomable speed that he and other world-class marathoners run, they simply cannot rely on slower-burning body fat stores. 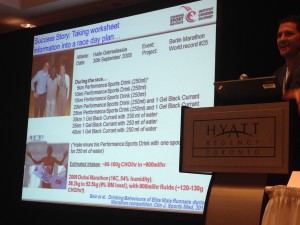 In marathon and ultra-marathon distances, teaching the body to rely on fat, rather than carbs, is becoming more popular.  The premise is to move the athlete towards a low-carb, high-fat diet, which eventually helps the body to adapt to burning more plentiful body fat stores during endurance performance (while our body only stores enough carbohydrate to get us through about 2 hours of intense activity, even a lean athlete has enough fat stored to get through a day or more of running).  Moving away from carbs allows the athlete to divorce him or herself from the need for sugary sports drinks and icky-sweet gels.  Not only does this cut down on the intake of added sugars, it can also make things easier for the gastrointestinal system, which suffers less distress when not overloaded with sugars – some of which get fermented, causing unpleasant bloating – that need to be digested while the body is working hard.  The result can be a happier stomach and, in some cases, a healthier athlete, when hundreds and thousands of grams of sugar are removed from the training and race-day diet.

I don’t have a problem helping an athlete switch from carbs to fat as fuel.  I have clients I work with who are on low-carb, high-fat diets, and they love it.  Many have had great success and set personal bests with it.  And for athletes who are overweight, at risk for type 2 diabetes, there is evidence that a low-carb, high-fat diet might be the best choice for overall health and weight control.

But that’s where context comes in:  low-carb, high-fat isn’t for everyone, nor should it be for all types of athletes.  The athletes who do well with low-carb, high-fat diets typically do steady-state endurance work.  And while a growing number of top ultramarathon finishers are low-carb, high-fat followers, they still fall into a different category than rowers, basketball players, tennis players, and sprinters.  (If you want to learn more about this debate, read Dr. Asker Jeukendrup’s recent blog on the topic versus this piece from Runner’s World, featuring low-carb, high-fat advocate Dr. Tim Noakes). For healthy, competitive athletes for whom top speed, or bursts of speed, is essential, consuming carbs before or during important training sessions and competition still makes sense.  And, it would seem, if you want to have a shot at a world record in the marathon, then you’d better learn to love the taste of sports gels – black currant sounds like as good a choice as any.